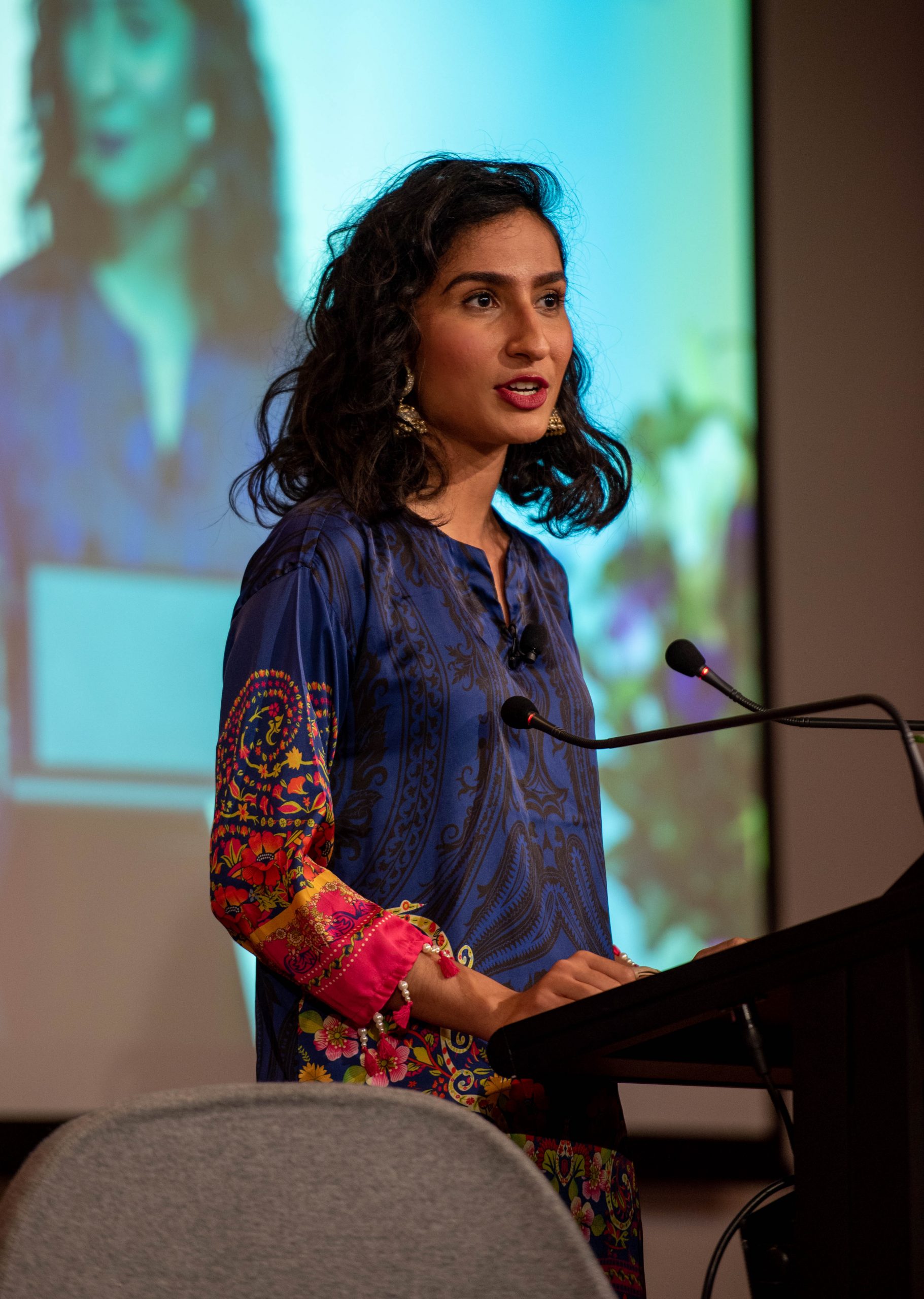 Born in Pakistan, now living on Darug land, Mariam is a community developer: she rallies people behind a goal and builds their capacity to achieve it.

In 2018, Mariam won the first-ever Australian Dell Policy Hack for a proposal tackling women entrepreneurs’ access to capital in Australia. By 2019, she had co-founded MoneyGirl to empower and inspire women to become financially independent.

Six short years after her arrival, the Australian Financial Review recognised Mariam in its 100 Women of Influence 2019 list. She was recognised by the Foundation for Young Australians as a Young Social Pioneer 2019, and a 2020 NSW Young Woman of the Year Finalist.

Born and raised in Karachi, Pakistan, I had never been outside the city when I moved to Australia in 2013. As a survivor of sexual abuse, I didn’t think I would live if I stayed. With $300 in my pocket, I arrived in Sydney. I was 19.

I started university but couldn’t find a job. A bar owner said, “I don’t want a Mohammed serving at my establishment.” At the time, I didn’t understand what he meant. It took me a while to come to terms with Islamophibia and racism.

Of course, I did eventually get a job, graduated, went on to do a Masters. I researched how religious discourse in policy impacts women’s development in a country. And, boy, I loved it!

So much that, In 2016, I was elected Women’s Officer of the Sydney University Postgraduate Representative Association (SUPRA)- the only woman of colour in the organisation. Here, I founded the Survivors Network – a peer support group for survivors of sexual assault. At the same time, I was the Gender Coordinator at the South Asia Study Group (SASG) where I hosted Sydney University’s first ever Women of South Asia Summit!

The experience of being an ‘only’ opened my eyes to the world’s “Diversity and Inclusion” strategy. I learnt that diversity for us means having a woman in the room. That usually means a white woman. After that, the doors open for men of colour. THEN it’s the turn of women of colour, among whom, Black and Indigenous women are the last through the door.

Pakistan taught me to advocate for all women. Australia taught me to appreciate the nuances of this conversation. I understood my privileges better. I learnt from other cultures. I realized that my progress as a migrant woman will always come to a halt if my indigenous sisters are still oppressed. I learnt that, actually, there’s plenty of room for ALL women to succeed, together. And when I was privileged enough to get in a door, all I had to do was keep it open for the women after me.

In 2017, I became the President of SUPRA. I led a community engagement plan to increase inclusion and diversity in the organisation. In the following year, SUPRA saw the biggest election turnout in its 40-year history. A record number of CALD students participated – and were elected! My work was done. I had opened the door for the people who would come after me.

In 2018, I finished my Masters and remained focused on my core passion: women’s development. I care deeply for my tribe. Young women. Women of colour. Women who have experienced adversity, faced violence. I am all those things. I felt safe. But my peers struggled.

So, in 2019, I co-founded MoneyGirl – a social enterprise providing a financial literacy program for young women. This work was made possible with the support of the Foundation for Young Australians (FYA), ygap, and the Bright program by Lendlease. With MoneyGirl, I’m on a mission to make financial independence something all young women aspire to.

That’s the work I am continuing in 2020 – enabling my tribe to unleash their full power and find freedom, so fewer and fewer women have to live with abuse and violence.

Young Woman of the Year 2020, Finalist

Young Woman of the Year 2019, Finalist

Have a Question? Want More Info?